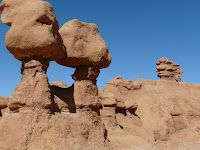 I just spent the last day and night in Southern Utah with my son, 25 other scouts, and a few parents / scout leaders at a place called Goblin Valley. It is a place of very unique rock formations. The water and the wind has eroded 170 million year-old Entrada sandstone and siltstone into gnome and globlins. From an old, old, old inland sea to the park today. It is worth a bunch of exploring.

The area was first discovered by cowboys of the old west. In the late 1920s a ferry owner / operator named Arthur Chaffin came into the valley. He came back in 1949 to further explore and photograph the area and named it Mushroom Valley because of the shape of the figures and stones. It was made a state park in 1964.

A few hikes are available in the area. Lots of great sites. Some camping in a campground as outside the park. Really beautiful. And guaranteed to send you home with red dust in your shoes.

Photos of the area, along with a few boy scouts.