Christina Baldwin wrote a book called StoryCatcher. It is a delightful read reflecting so much of the depth of her life. It is a delightful invitation to notice the power — learning, relationships, pathway to action — that can show up in listening to and mining our stories.

Three days ago I met with fellow board members from the Salt Lake Center for Engaging Community. Eight of us gathered. We told stories. At one level it was an invitation to checkin — say a bit of what is alive for you. This board is not a traditional board. It is more of an incubator kind of group. We share our work. We develop our friendships. We ask for help from each other. Our checkin was half of the meeting.

It was in our storytelling that I found a deep, rich harvest, again. What could so easily be dismissed as “long checkin” was for me heart of the work. I listened. I mapped. And from that listening, tagged some of the core themes. For us working with engagement in community, there was much learning there. Much about our current noticings and practices of building thriving community. A bit of this is below. 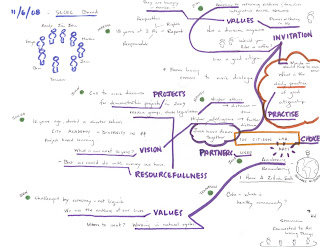 Values
– there was Jim from the Integrated Health Network sharing his work with soldiers returning from duty, integrating with their families. He spoke of the power of healing that is internal, helping to mirror this to the soldiers. He also spoke with a few tears welling of how the marines are so hungry for this kind of help.
– there was Ben from the Hemingway Foundation telling a story of this challenged economy and how it is shifting employment for many people. “We are the authors of our lives.” And he continued to speak of his desire to work in the natural cycles of life, as happens in nature.
– there was Jane building on Ben, sharing her commitment to living in balance on the earth. She shared some of her awakening and strong sense that many are awakening and remembering.

Invitation
– Jim again speaking of his reaching out to soldiers. He speaks it with such heart. Reaching out is a simple principle.
– there was Martha, a long-time educator and leader of the Three Rs program describing how there is less divisiveness in the state now. The simple invitation to have coffee together between people of different religious affiliations.
– similarly, there was Randy of the Foundation for Intereligious Diplomacy sharing research he read on the impact of having dinner together. The invitation to just focus with each other for a bit of time in the day to support well-being.
– there was John of the CEC sharing some of his excitement in a Call to Civic Discourse in Utah, sharing the core practice of good citizenship — talking to each other.

Practice
– I am very much paying attention to simple steps of daily practice. Not grand designs. Just simple daily practices and calling myself and others to such attention.

Projects
– John spoke further of demonstration projects for 2009, working with the legislature and community groups

Vision
– there was Sonya, a cofounder of a local charter school reflecting on her enrollment. I could see and feel as she spoke the love that she feels for the kids and families that are part of her school. She asked, “what will be like in our next 10 years?”
– and Randy speaking further about relationships between ethics, intelligence, and distance.

Choice
– Jane speaking further on the choice of how to seed community, exploring arts programs.

Resourcesfullness
– Sonya reflecting further on her school. “We do the best we could with the money we have.”
– John’s invitation to media groups and state legislaters in civic discourse