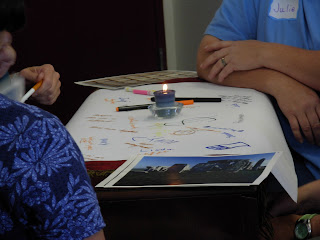 Last week I was part of a team that hosted a lovely group of people that work with The Center for Human Development (CHD) in La Grande, Oregon. CHD is a private nonprofit that provides behavioral health, public health, developmental disabilities services, and veteran’s services to 25,000 residents of Union County. Their work is to support healthy communities. We were together for three days, a non-residential program. Our meeting space was in a local church.

CHD has a core set of values that were created some time ago (http://www.chdinc.org/values.htm). They are really beautiful statements that have guided their work, both when their structure included a much-respected CEO, as well as now in the thick of a commitment to self-directed work teams. The values themselves were subject for much discussion at this gathering. For some, revered, grounded in years of work. For others – a third of the organization has been there for quite a short time – they have the feeling of being nice words, but lacking power without the experience of having created them. The end activity, the closing part of these three days was to place these half dozen truths in the background and invite each to speak of what they are committed too. Beautiful things were spoken, the kind that are born out of a few days together. I suspect that many of them could land on the existing half dozen truths. Good. And they carry much more power now, much more ownership.

Inspired by the half dozen truths at CHD, here are a half dozen or so key patterns I noticed through working with this group. Here is a bit below, woven into what I see as patterns in other groups.

Supporting Healthy Communities Requires Being Well at Home — I love the way that CHD wanted to do its own wellness check. Their work is in supporting healthy community. That itself requires a healthy community check with their organization. Sixty showed up, which itself is a story. Fellow hosts, Steve Ryman and Roni Wood, both internal to CHD, both had experience with the Art of Hosting Pattern. Steve shared his desire to bring the AoH to CHD wondering if he might get 20 people to show up. There was an energy of yes in this that Steve and Roni helped respond to so that many could be in this wellness check.

Grief is Part of the Work — Public health work can be intense. I heard this in many stories. There is a grief that shows up that can get embodied in the individuals and in the system. I’ve heard Meg Wheatley often say, “if you want a living system to be healthy, connect it to more of itself.” Sometimes it feels like we overlook the grief that we carry. I don’t sense it is therapy that is needed – this is not my focus. But simple witnessing of the realness of the grief helps it to flow in and through a system of people rather than festering. And also, as was apparent in this group, it is OK to witness the grief that is non-local. There is grief in the world in health care as a whole. There is grief that many systems are collapsing. Some of these are deeply personal. Each of us carries this with us. I was glad to be with other hosts, Teresa Posakony and Diane Altman Dautoff, who know much of hosting this grief. I’ve learned a lot from another host on this one, Tim Merry – don’t fix it; feel it. It is a gift to make room for grief and can be beautifully hosted to free people into other levels of work and relationship. I also learned and saw more of how leadership teams often carry so much of the grief of a system. These multiple sources of grief are too much for anyone. To witness this is to move into more health around it, just with realness.

Healthy Communication Comes from Healthy Relationships – I heard many people talk about the need for better communication, more direct communication. I heard this amplified as we made our way through the first day and the second morning. One form of better communications is clearly through some specific skills. There are people who teach these well. Sometimes this is called for. What became clear for me is the pattern of healthy communication that can grow from multiple touches with each other. It can come from being in real relationship with each other. The joys, the sorrows. For me this ties back to the Meg Wheatley statement – the Art of Hosting pattern offers multiple ways for people to connect to each other. Conversation. Small group. Large group. Play. Hosting and offering. Walks. Eating. Private journaling. The most simple structure of conversations can support this real connection with each other. When those connections are made, then we give ourselves much more room for our communications with each other. It becomes less about judgment. It becomes more about curiosity.

Open Space Cracks It Open – For this event, the first day and a half were spent in the deliberate challenges of arriving and cultivating learning. There were café conversations about why are you really here? We hosted appreciative interviews about when CHD has been at its best. There were teachings about the chaordic path, the dance between chaos and order that produces the new. There was play and the creation of agreements. And there was a groan – sometimes expressed as “when will we get to the real work?” In the afternoon of the second day we hosted in open space. Everything shifts in this. The questions move from the hosting team into the questions of the group. The self-organizing increases as people find each other in their passions. The harvest from OS was beautiful, that shift from hearing it from others to speaking it with ownership. In this event we spent much of the third day in OS also. I would like to experiment with OS earlier in the process. I wonder what is possible. And I am really curious about how the first conversations ready people for open space because of the ground in purpose and relationship. 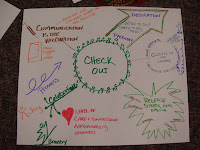 Slow Down To Speed Up – For this event we had three days. For many, the first day feels a bit light. It clearly is a slowing down. It is a diverging before converging. It is a deliberate time to let go of preconceived notions, and in relationship with each other, welcome a new sensing of what we really believe. We are all such creatures of habit. Habit in thought. Habit in action. It is all so beautifully intended, and often, just perfect. But for times like this, a wellness check, a pause is just what matters most. I believe that the slowing down gives us added capacity – mostly in our relationships – to speed up. Our work shifts from assignment to invitation and creation.

Four Levels of Harvest: Content, Process, Relationships, Energy — Most of the time, I feel that people are focused on a content level of harvest. It certainly is in me. What is the work? What is the solution? What facts do we know? These are all important. Content by itself is not enough. It is the stuff that works for a while but often will end in more stuck. There is more that we can learn I feel.

Process is one of those. Process, in this case some simple conversation practices – circle, café, open space, appreciative inquiry – are the ways that we can get unstuck the next time that stuck inevitably shows up. For this group, some very simple aspects of circle were important. I say simple. I mean the deeper aspects that have simple form. Like calling people into a particular question. Like pausing to start the meeting. Like being able to propose and vote with thumbs, recognizing that often it is a few sideways thumbs when it feels like all down thumbs. Like rotating leadership. Like being deliberate in harvest. Even in self-directed work teams, it is a gift to have structure. This for me is the gift of hosting and the gift of being hosted. A river bank, if you will, to support flow.

Relationships are a third level of harvest, and maybe the most important. When we have better quality of relationship – a commitment to curiosity even in difference, we have better chance of doing our work in healthy ways. We shift from extremes of cajoling to invitations to create together. We shift from force to support. This sounds like such a light thing. In my experience, it is not. Relationships, again found with some simple mixing it up and hearing stories from others, are what lead to sustainable actions. If people leave in friendship, more work will get done and with more imagination. This is the pattern I see, and saw in one way as people noticed surprise in each other. One person shared, and later offered, his rap and hip hop work at CHD. A chance for one to be more complete or whole invites others to do similarly.

Field is the other level of harvest that I notice. It is the more difficult to voice, yet may be the most important. It is the feeling when good relationships are taken to scale. When the sweetness and effectiveness of one relationship transcends into the relationship of the whole. It is the space where trust abounds, and where information needed also abounds. It starts to feel metaphyscical, and I believe is. At some point I sense we will all find more language for this – building on what is already there, for example, when we speak of strong culture – that shows us something present but hard to see in our current habits.

In all of this, I saw much with this group. Open space sessions were called, convened, harvested, and actions were planned including each of these: Let’s Celebrate; Staff Support; Community of Practice; BHT; Simplicity in Everyday Hosting of Conversations That Matter; The Relationship Between Authority and Friendship; Chaordic Stepping Stones as a Tool for Planning Meetings; Tech Support – Beyond Just Solutions; Wise Action That Lasts; Relationship of Self-Directed Teams and an Administrative Council; Growth and Sustainability.